An Asphodel
In the poem An Asphodel by Allen Ginsberg, he writes of desires and wanting to fulfil them but the reality of being drunk and naked in his livingroom is all he has that night. Loneliness surrounds him with nothing/nobody around but his thoughts. The text puts the emotion of loneliness right infront of the readers eyes and demands to be felt. I personally relate to this because I typically am alone quite often and have a lot of time to myself to think about what I desire most.

The poem Song written by Allen Ginsberg actually hit me the most out of the other poems I read by him because he writes about love, more on that later. Allen Ginsberg writes that love is a feeling that everyone wants. Essentially that everybody longs and desires love regardless of where they’re at in life. He says, ” No rest, without love, no sleep, without dreams of love-” Which just furthers my point that everybody, in some type of way wants love or at least a form of love. However, he does also state, “for the burden of life is love” In his writing, he speaks very raw, honest about how love is. It keeps us awake at night, it weighs heavy on our minds, it even comforts us. Love, in my opinion, is the most desired thing. To pretty much summarize the text, Allen Ginsberg writes about how love is this important feeling that is so desirable, but also is a burden sometimes. I feel like I relate to Song because I’m always putting my heart into everything I do, and in some ways I even want the cliche, generic version of love. The world runs on it.

Wild Orphan, written by Ginsberg is a poetic story about a little boy who walks by the river with his mother, but he dreams of a better life. His life where he lives at the time is dull, depressing. Him and his mother were poor and miserable. The family was poor and the boy doesn’t have a father, and feels great grief because he’s lonely. In several stanzas Ginsberg writes about how lonely the boy is. The boy dreams of how much better his life would be if his father hadn’t left and if he wasn’t poor. I resonate with this poem because I myself don’t have a father as well. When I read the text, I felt how heavily the words were packed with sad and lonely emotions, because I relate to that.

* I noticed that these poems are interrelated by the emotion of loneliness. In An Asphodel, the guy drunk in his livingroom is lonely. In Song, Ginsberg writes that loneliness can be compensated with love, and thats why it’s so desried. And lastly, in Wild Orphan, the boy is lonely because he doesn’t have a father. All three poems have words and stanzas about loneliness. 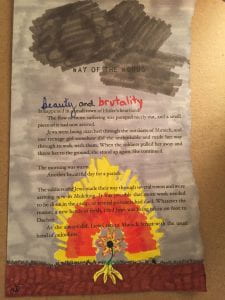 I drew this radiant flower surrounded by darkness because it gives a good visual for the main key point of The Book Theif; There’s always good in something that’s bad. That there IS “beauty in brutality”

Do you have a work of art that holds significant value to you? I know I do! While doing my research to figure out exactly what I was going to write about, I actually realized that I find a lot of different types of art meaningful to me. On the other hand though, one specific piece of art has always stuck with me. The Diary of an Oxygen Thief is by far my absolute favorite book of all time. This book was written anonymously, which in my opinion I feel that it makes the book almost even more powerful. The Diary of an Oxygen Thief is about an Irish man living in London who finds enjoyment in emotionally abusing women, but later receives his comeuppance in the best of ways. I value this work because its such a raw, emotional, honest story. The main character, who also happens to be the writer of the story, tells the audience his story on how emotionally abusing women made him feel powerful. He actually states, ” I like hurting women, I get off on it.” and I find that so interesting. How can one man feel absolutely nothing for the poor women that he has hurt? Throughout the writing he falls in love with a woman who does the exact same thing he does. Hurts people. She has men fall in love with her so that later on she can use their genuine emotions for photography. She used and hurt him, he learned his lesson. He ends up staying away from all relationships and women for five years because he feels guilty and ashamed of what he’s done. I’m absolutely in love with this book because it teaches the age old lessons, “what goes around comes around”, and “treat others the way you want to be treated” I fully believe this piece of literature has artistic merit because it is the most uncut, unrefined book I’ve ever read. It was written as if every thought that went through the writers mind, he just wrote down. It’s literally like reading a diary of someones raw emotions and experiences, and I believe that that’s the best way to write and the best way to perceive literature. I 10/10 recommend this book to everyone, definitely worth the read!

I recently listened to the podcast, Maria Popova on Being Interesting, Creating More Time in a Day, and how to Start a Successful Blog, and I actually agreed with most of the ideas she expressed. However, one quote stuck with me. Maria stated, ” Inhabit your own existence with a deeper sense or presence.” I find this quote meaningful because us as human beings, we are constantly striving for better. We are never satisfied with what we have, we always want more. It’s simply human nature.

This quote relates to me because I’ve never been satisfied with what I have. Most of the time I don’t even crave the presence of materialistic items, I’d rather chase dreams. By chasing and accomplishing my dreams one by one, I am inhabiting my own existence with a deeper sense. and I think that is Beautiful.